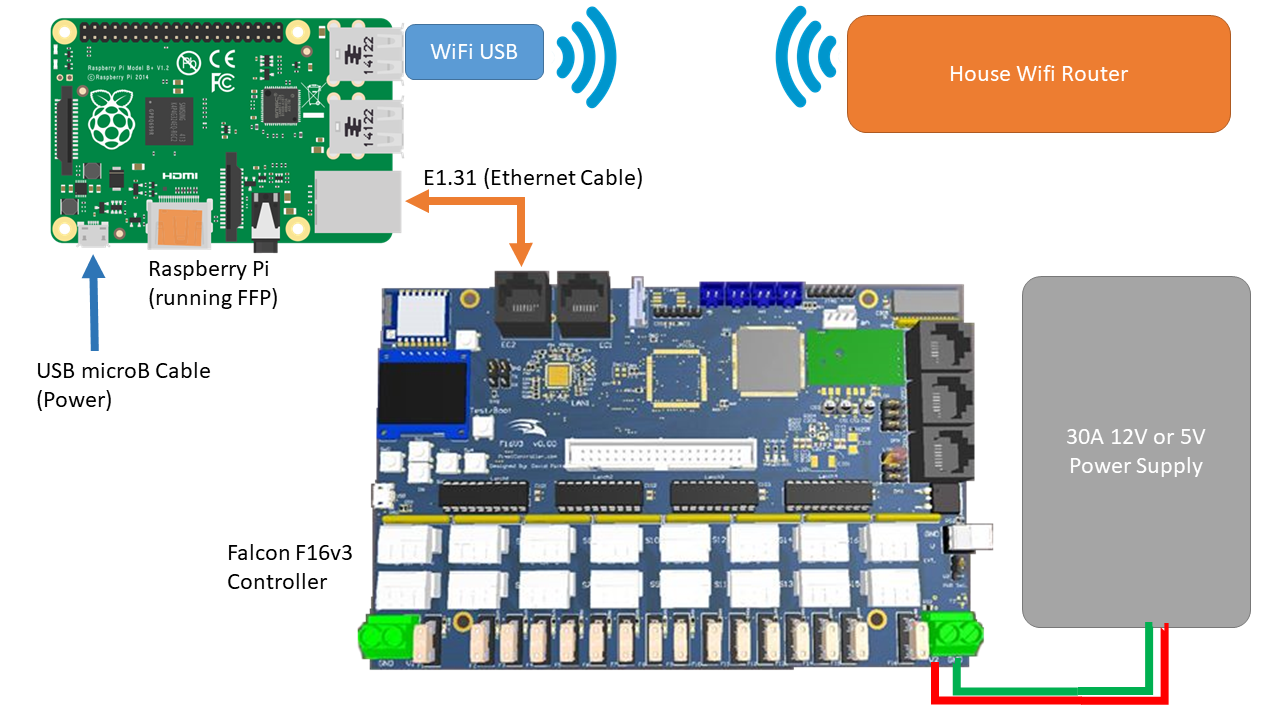 I found a need to highly document an easy approach for users to setup a Raspberry Pi Falcon Player (FPP) with WiFi so that I could access the FPP connected to a Falcon F16v3 over the E1.31 (Ethernet) both from my house PC. 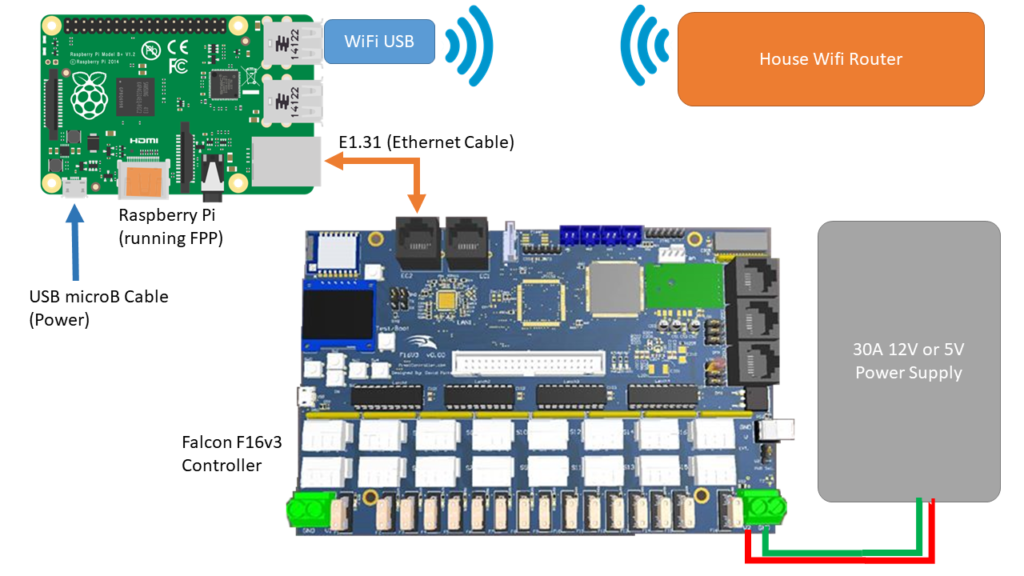 There are 7 steps you need to setup in order to correctly connect from your local computer in your house. This tutorial assumes you already have the Falcon Player on a Pi installed (i’m running v1.8) and v2.00 on the Falcon F16v3 controller.

You need to have everything wired up like I have in the above layout. A WiFi module plugged into a Raspberry Pi (or use a Raspberry Pi 3 with a built in WiFi Chip), I used a Edimax module I had laying around that supports Linux. An Ethernet (CAT5) cable setup between the left Falcon RJ45 input and the Ethernet input of the Raspberry Pi. 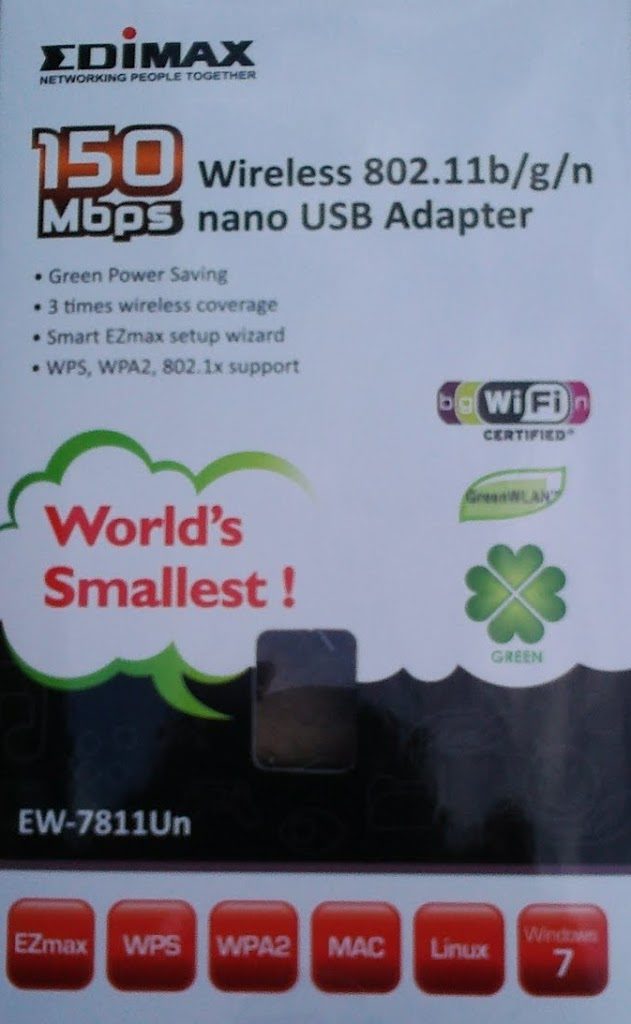 Have the wlan0 (WiFi) of your FFP network setup for DHCP and obtain your local IP address for the Raspberry Pi, mine is 192.168.0.8 which is set by a router, or you can setup a static IP that is of the same subnet class of your router. Make sure your Pi is logged into the router with an SSID and password.

There should also be a DNS of the router, mine is 192.168.0.1 remember this number because you’ll need it for when you setup both the controller and Falcon Player network settings. If using DHCP, no need to manually set it up for wlan0. Below is a picture of my wireless setup. You can ping to make sure you have good connection access.

(Hint: you’ll need to connect via Ethernet initially to setup the WiFi settings)

(Hint 2: if you have multiple Falcon Player’s in your show, be sure to use a different HostNames, as this makes it easier to connect to when setting up and checking your display.) 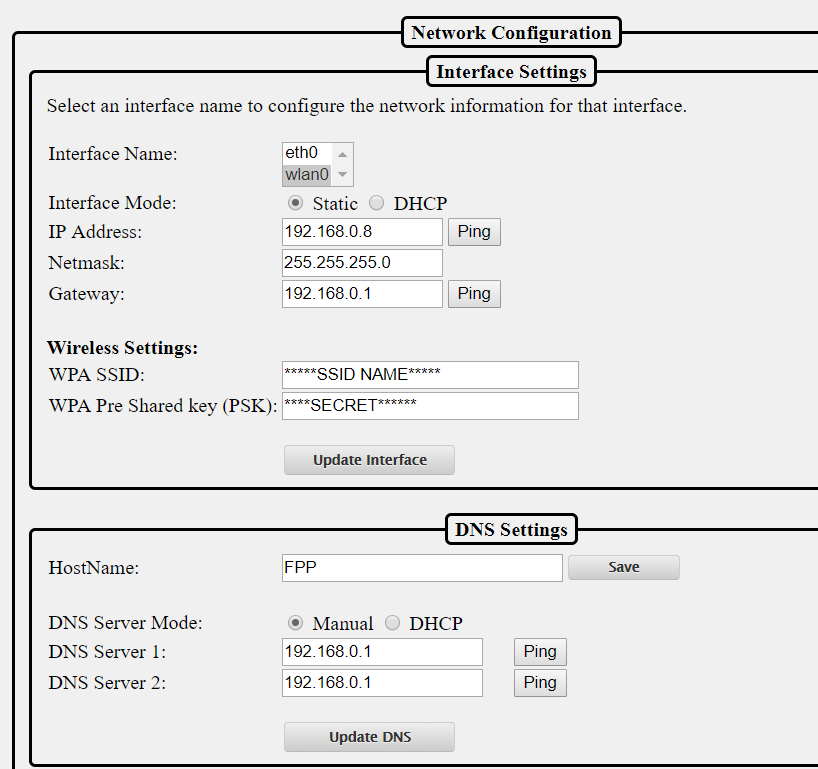 Understand the end goal is to setup the Raspberry Pi to pass-through local network data to and from the falcon  or equivalent controller. In order to do this you need to setup the local FPP with a separate subnet that still works on your primary house router. An example of this is changing the third octet to something else.

Next setup the DNS to the same settings as the wlan0 which in my case is 192.168.0.1 for both the primary and secondary. Then press the Update DNS and Restart the DNS buttons. You might need to reboot the Raspberry Pi for good measure. 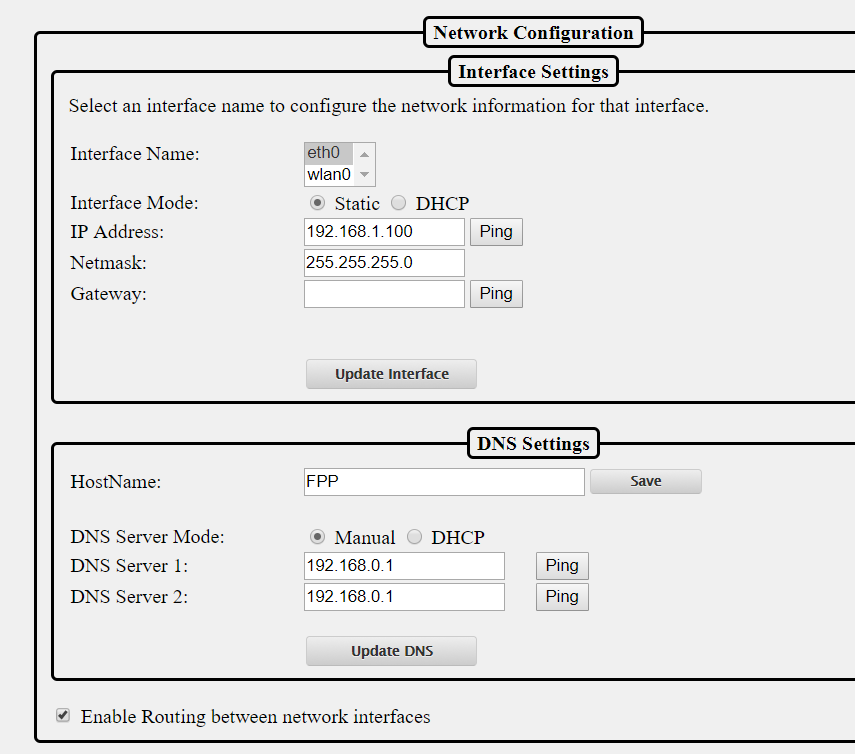 This is a simple step, because we need those from time to time. Make sure you check the box at the bottom of the Networking page of the Falcon Player so that you “Enable Routing between network interfaces”. This is very important if you want the Falcon controller to have internet access or to be reached from your house PC.

This is another easy step to miss, was my primary reason I dug around the internet so long. The communication won’t work between the boards if you don’t enable the channel outputs to talk via eth0 and enable it. Go to the Input/Output Setup tab and select Channel Outputs. See the picture below for what to enable and select. (Don’t worry that I don’t have Universes setup yet). 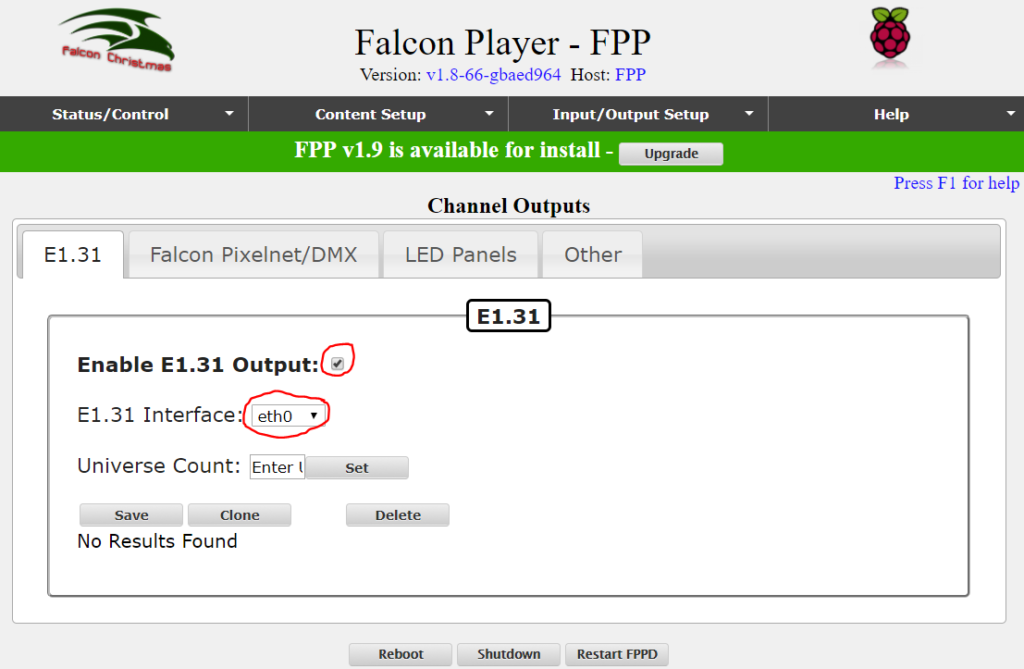 Lets move to the Falcon F16v3 controller or whatever controller you’re using. This is the smart pixel RGB controller that provides power to your LEDs and tells them what color and intensity to be in your sequence. We’re going to setup the network so its working with the Falcon Player.

A very important item to setup correctly is the Gateway address of the controller. To make this whole thing work right you need to set the gateway address to the same address as the primary FPP eth0 IP address. Which in my case is 192.168.1.100, don’t be alarmed or confused, just make sure they match.

Make the DNS primary and secondary the same as the house router, so in my case 192.168.0.1 will do just fine. Press the ‘Restart Interface’ button when finished. 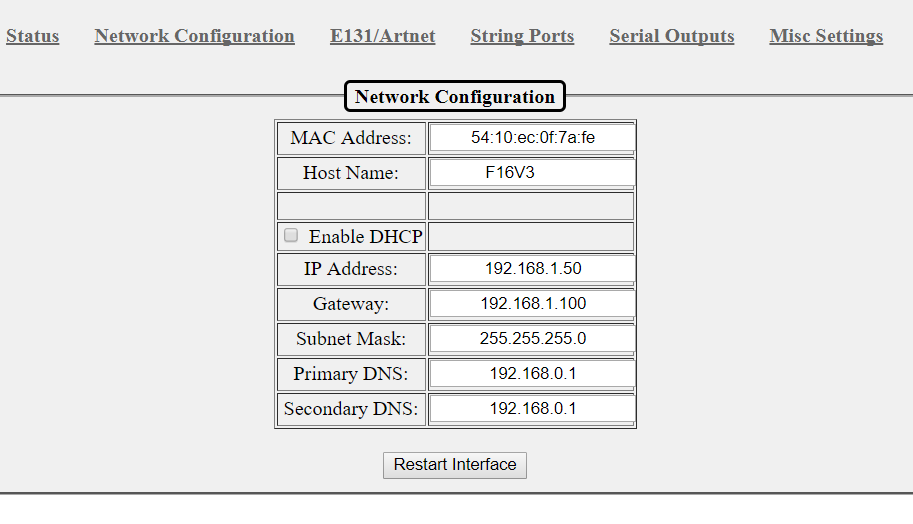 Almost done, you’re on your way to accessing both the Falcon Player and Falcon Controller remotely. Way to go!

In this last step we need to tell your local PC that you have another subnet mask actually located behind the Raspberry Pi, because your router isn’t that smart to know whats behind it. So to do this we setup a PC IP route to point your PC to the Raspberry Pi which in tern accepts the alternative subnet and directs the data to the Falcon Controller for access. See its Simple!

First, open up the MS command prompt (CMD) as administrator. Right click it in the search, select Run as admin.

Then type into the prompt the following, with your Falcon Controller IP address, the subnet mask and the wlan0 IP address of the controller. The -p means this is going to be a permanent assignment. you can replace ‘add’ with ‘delete’ if you make a mistake. For my local laptop I setup the following:

Hope this was helpful.