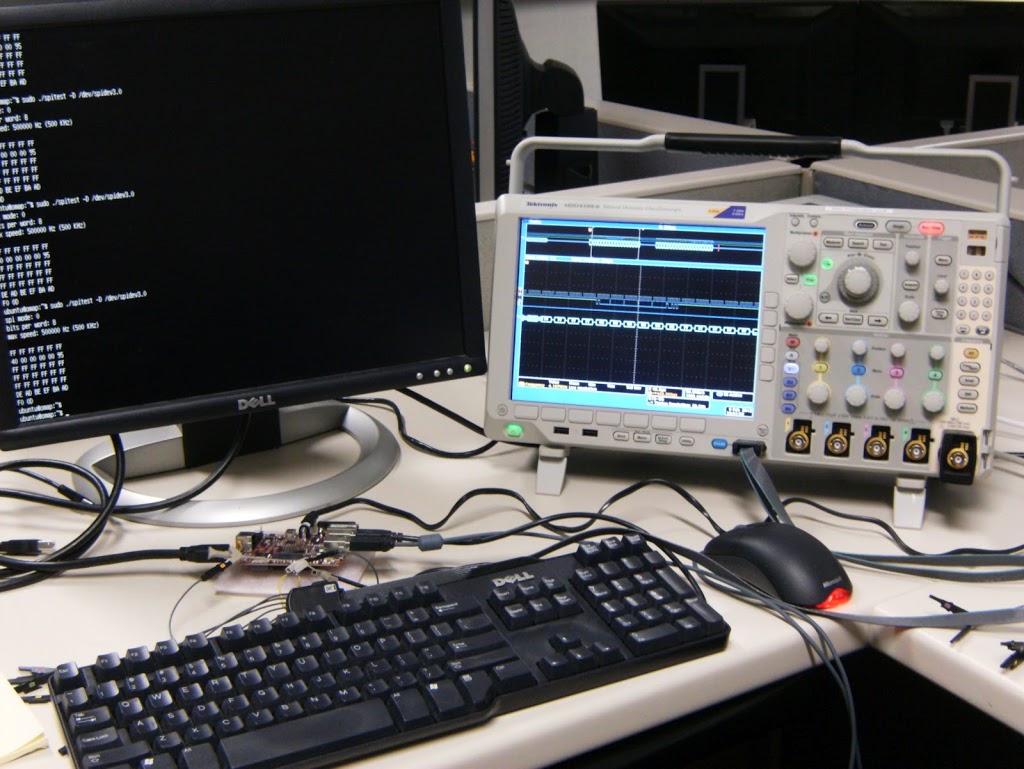 So this is for people that are trying to get SPI working on their Beagleboard XM rev C boards. At the time that I began this adventure I had no clue how to get SPI working on my board. So I decided to blog about it while I was learning, and now it works. The setup is for Ubuntu 11.10 and using Kernel v3.1.10 So let me share with you.

Now you must understand I’ve spend much time looking at many different posts on the google group “beagleboard”, many blog sites, elinux pages and such. People are just ripping their hair out as someone put it on how to successfully get SPI working. What I found was skattered knowledge of the topic and I wanted to bring it all together for the novice user.

There is something else you should know about me and that is i’m a novice user in the Linux world. In my search I was really searching for was a straight forward walk though from starting to finish, starting with a blank 4GB microSD card and ending on getting SPI working.

So lets get started from the beginning….

Identify your SD Card in Ubuntu

You’ll see something like the following, notice how my 4GB flash drive is referenced as /dev/sdb1 this is important and “sdb” will be used later in many different cases:

(UPDATE – THE ABOVE DOWNLOAD NO LONGER WORKS, PLEASE SEE FOLLOWING LINK FOR FILE) Be sure to place this in the standard home directory like before. Then continue procedure.

Now that you’re in the right directory its time to call the script that RCN-EE (Robert Nelson) made what will partition and setup all the files on the micro SD card. Now this part its important to remember the drive name that we did above, “sdb” as this is substituted into the command below. 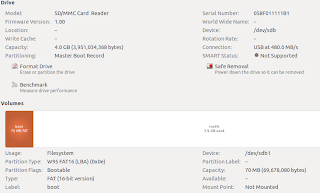 Now that Ubuntu has been installed on your Beagleboard XM you can test it by inserting it into the beagleboard Xm and starting it up.
NOTE: Default username: ubuntu Password: temppwd
To check the kernel version type the following once it’s booted up.

Now a little bit of SPI background knowledge is needed in order to get this working. First off Serial Peripheral interface (SPI) is made up of 4 wires normally. It is a standard that was designed by Motorola for use with their micro controllers. If you’re interested in learning more about SPI i’ve added the Wikipedia link in the bibliography below.  Here is what a standard SPI setup looks like, multiple slaves is optional. 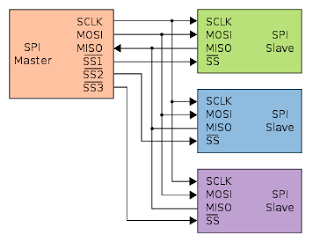 On the Beagleboard XM there are 4 SPI controllers that come with the processor, but only two of them have been brought out to be used in the hardware, these are McSPI3( I will be using)  and McSPI4. I’ve written up a small table in excel to demonstrate this information (details came originally from BB XM manual). 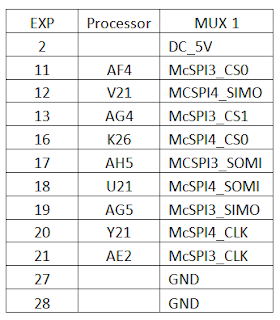 It will be important later when we’re testing the test program that we have the right pins connected. We’ll connect pins 17 and 19 of the output pins MOSI into the MISO

So now we’ve made it to the point of needing to setup the SPI pins in the Kernel. Everything i’ve learned is from a combination of time, searching all over the internet and a couple discussions with Robert Nelson and reading through lots of his scripts.

Now from my reading there are two main parts that have to be changed. The first is the PIN MULTIPLEXER, the second is configuring the SPI_BOARD_INFO.  Most of this is skipped and done automatically through scripts we’ll be using but its good to know whats going on. More information can be found at http://elinux.org/BeagleBoard/SPI if you’re interested.

First there are a bunch of tools you need in your Ubuntu environment. These include the ARM compiler and the Git tool, uboot tools and more, you’ll understand as we progress. So lets install these ( virtualbox Ubuntu):

Now before we continue we have to un-comment the following line by removing the “#” symbol. Save the file and we’ll continue to to the building.

Now you have to un-comment a line in system.sh by removing the “#” symbol. Save it and continue.We will come back to edit this file more later, so keep note where it is and read through it if you have time. As this file holds the MMC directory for when we’re using the load uImage script.

In order to compile the kernel you have to first have all the basic Linux kernel files. To do this we must have the following files. By typing in the following, it should take a while (~500MB):

After this is complete we are ready to compile the kernel, make sure you go back to the stable-kernel directory before you build the kernel.

During this time it will change from a default terminal screen to a select screen that looks like the following. 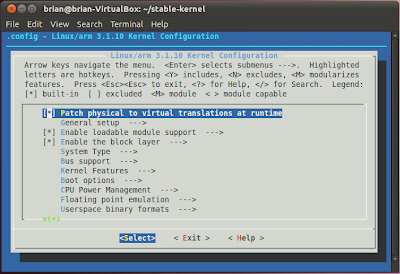 Once your to the Kernel Configuration menu scroll down to the “Device Drivers” then go to “SPI Support” and than make sure the following are selected.

After you Exit it will ask you to save, do so. Then it will continue to install for about an hour or more depending on your system speed.Once the creation of the Kernel has been complete run the following line to apply this to the microSD card.
Two things have to be done before this can be done. First you have to edit the system.sh file again. Make the following adjustments according to your drive letter like the beginning of this article (/dev/sdb)

CHANGE the MMC and un-comment “#” in front of the ZRELADDR:

If you desire to go into board-omap3beagle.c located in KERNEL you can change some of the default settings and then apply this patch.

Note: you’ll need to recompile the kernel afterwords I believe. I didn’t have to update, this was advice from Robert.

Now the last step is to load all the files to the microSD card, make sure you’re in the /stable-kernel/ directory still:

After all the loading is done safely remove the flash card from your computer and load it into the Beagleboard Xm. Once everything is loaded up you should be able to change directories to the /dev/ and see your spidev3.0 and spidev3.1 device names there now.

Time to test this code and and see that everything works. To do this i’m going to load my microSD card back into virtualbox and test the ports. To do this we need to reference the table for the pins above and connect pins 17 and 19 which are SPI3.0 MOSI and MISO. They look like the following on the back of the board (MARKED IN RED DOTS). 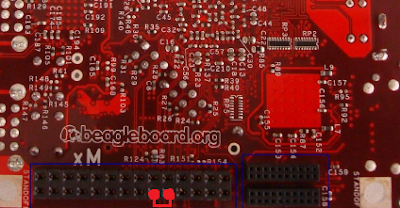 Once back in virtualbox using the terminal go to the following directory and compile the SPItest example.

Once this is created, move the “spitest” to the main directory of your microSD card where Ubuntu is running, normally found in the /home/ubuntu area.

Now un-mount and safely remove the flash card, hint, like you always should be doing. Insert back into the Beagleboard Xm and bootup. Once you’ve logged in run the following command to check if SPI is now working.

If you saw the first set of data above then you’ve completely setup SPI correctly. Congrats!! 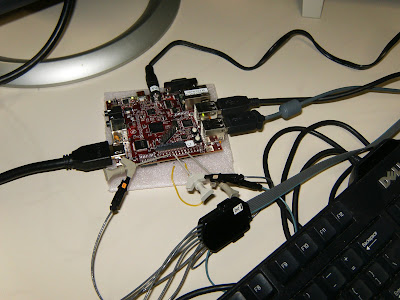 (Probing the Beagleboard Xm with digital channels of Tektronix Scope) 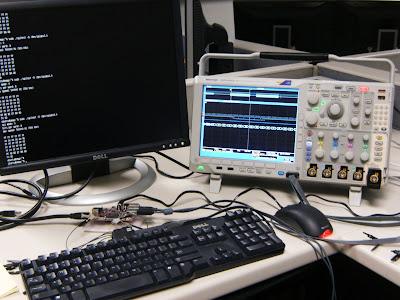 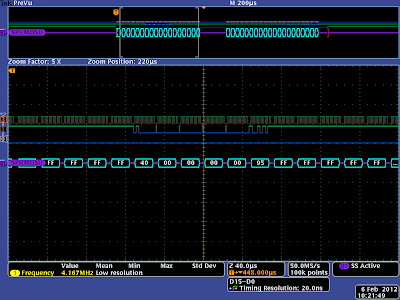 As you can see I’m decoding the channels from the BBXm and i’m getting the correct SPITEST signal. This has been the final verification that i’m seeing both the Clock, MOSI and SS pins working. Sweet!!

If you liked my demonstration please leave feedback and pass this along.

Here are a few useful links I used during this process…

Helpful information on GIT commands and how things work:
http://stackoverflow.com/questions/67699/how-do-i-clone-all-remote-branches-with-git

Wikipedia SPI details (I added if you wanted to learn more):
http://en.wikipedia.org/wiki/Serial_Peripheral_Interface_Bus

30 thoughts on “SPI working on the Beagleboard XM rev C”