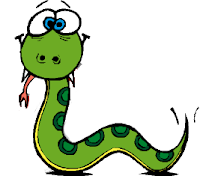 Most the time I could stick with programming C since my last posts required doing a SPI test that comes when you compile the kernel and test the ports. Coworkers I work with use Python on a daily bases so I figured this would help since my next goal is to write a GUI application that has different SPI commands or inputs and seems simple enough to do with Python. So Python here we come.

I’m going to start from the beginning and then include a download link of my final files to help you along the way.

It’s important to understand that you have access to the hardware that you’re looking to control. So before we move forward make sure you have on your bealgboard access to a spidev. This can be checked by going into the /dev/ folder and looking for spidev3.0 or such.

Look and see if you see something along the lines of spidev3.0 or spidev3.1 or spidev4.0, if you don’t please refer to my older post where I walk through patching the kernel and getting to this stage. Getting SPI working on the Beagleboard XM.

Next its important to have some understanding of Python. Now if you’re completely new to this like I am than taking Google’s Python Class will really help you out. It’s a two day class that may take you longer as it did me (time restraints), but you’ll learn a lot of basic information that should get you going on the language.

Ok, now we can start with communicating with the /dev/spidev3.0 device that is our SPI port on our Beagleboard XM. The first thing I read through was the C example that was provided by Kernel’s Documentation on SPI.  There are a few things that are very important so lets first make sure we have the right packages installed so we can do Python programming.

Now that the right packages are installed on your Beagleboard XM let’s take a moment to figure out how we want to go about controlling it. The methods I came up with were either one, figure out the right commands that are comparable to C and get them working in Python. Two, make a C module that could be called anytime in Python and passed in a string of Hex values.

Honestly I really liked option two so this is what i’ll be demonstrating. This whole process was not easy as I searched much of the web trying to figure out strategy of examples and blog posts and such. Once again here I am leading you to understand what I’ve found. So the first thing to understand about passing a C module into Python is its very similar to a DLL for windows. We will have a module that has a list of function that can be called from our Python variable and will transfer our data. My Goal is to take in a Python string like this and get a C hex like the following.

The reason for wanting to do this is simplicity. There may be better options and if so I would love to hear about them. Add a comment at the bottom of this post please!

To do the transformation there must first be a C program that takes in both the string data and the length of string. This will guaranteeing the data is being parsed out right in C as it was expected in Python. My Python test file I’ll call spitest.py and it will have something along the following lines on the Beagleboard Xm. 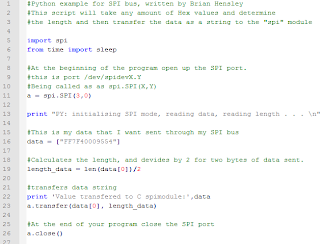 As you can see in spitest.py there are a few commands that are called out, such as spi.SPI, transfer, and close. These are the three main commands i’m centering my C module around and will be the ones I call out and use in Python. One opens, one transfers the data, and one closes the SPI port. When the time comes to test this I’m going to place this test file in the following directory that should be created after I compile spimodule.c. It’s important to have the testing file in the same directory for now as the compiled spi.so file. It’s also important to have the “import spi” which will import into our python code our spi.so module we are going to create in the future steps.

Then when the time comes I’ll call the following command to run my test from that directory.

Yes I know like this feels like we’re going back a step but I had to explain the python first. So now we’re going to create the spimodule.c file that will do the conversion of the incoming string to a hex value that can be transferred to the hardware.

To do so there has to be a understanding of two things one, how to convert from a string to a hex and two how to write an extension module. Neither are easy if you’re a novice programmer like myself. As much as I like to go into details, i’m not going to cover how to write a extension module for Python. More info on that can be found here Python Documentation for writing extensions. Great examples can also be found at Tutorials Points. The original code I found and edited and based my module from is documented here.

Within this spimodule.c that is being used is the following code I wrote that allows for the conversion as well as documents much of the code to transfer the data. 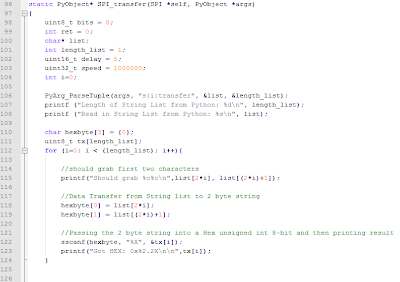 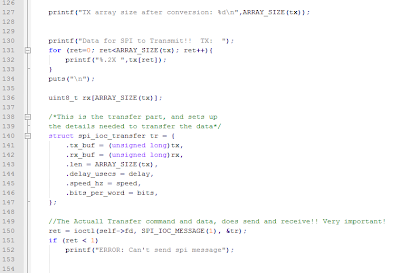 This code is the transfer function (not differential equations kind), but the one what will transfer our SPI data. It takes the string parses out the first two characters and saves them into a variable called hexbyte. Then using sscanf and scans it into a uint8_t type as a hex value using %X. Here is a table to explain the different sscanf formats and how to pass in different value types.

A good rule of thumb for helping with debugging and using different types of parsing and type conversion is to print your results and to separate them in your code so you can keep track and debug it later. You can see in my code that I often do printf so that I know where my data is and what it should be.

Now that my spimodule is made and should be working lets build it and run everything. Feel free to try my files above but note they are there for advice not to be your secure work around.

NOTE: THERE IS NO ERROR CHECKING IN THE CODE

So the first thing to do is to compile the code. I have my spimodule.c and a setup.py file located in my main home directory. The setup file is used as a compiling file that calls the C file and any other extension or author notes that are needed.

This will build your spi.so file and it will be located in the following folder. If it isn’t this is because it was built somewhere else and after building it it will tell you were it is located. There may be some warnings when you compile it but thats ok, as long as there aren’t errors.

You should see a file spi.so and this is where you’ll place your spitest.py from step three. Now lets run the spitest.py. One thing to mention is I setup the spimodule.c that got compiled into the spi.so to give some printf functions for every 2 hex value both as a string and later when it is type casted into a unsigned integer 8-bit size. 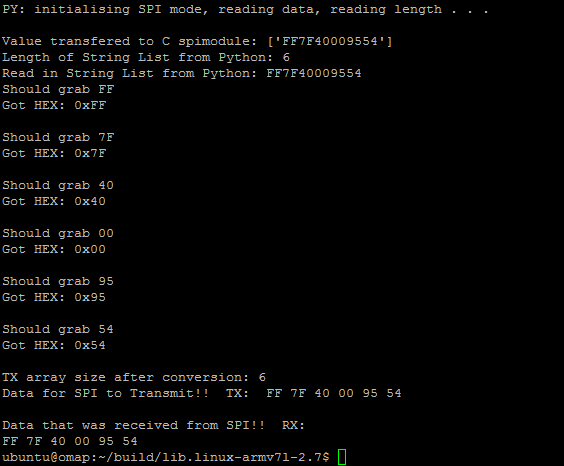 As you can see the string has been passed, and separated and then converted to Hex format. Then the data shows you what is going to be sent and what is received. If they are the same, than everything is a success. Now go on and program Python to pass your data to SPI bus devices!

NOTE: make sure you have a wire across the MOSI and MISO pins on the beagleboard xm.